I am called the Storyteller, it’s what the smiling man named me.  I suppose I’m somewhat of a mythical creature – or so I've been told. Stories are told
about how I can read people’s entire lives and change them anyway I want, simply by writing in their book.  Every creature has a book, after all.

I don’t have specific looks, they tend to change depending on who I’m around, but I've become quite fond of the Scough, so I have their fox ears and tail at the moment. As for what I hope to accomplish, I’m not sure.  I’m honestly just happy to be out of that library.  I suppose I wish to have a more interesting story of my own from here out. 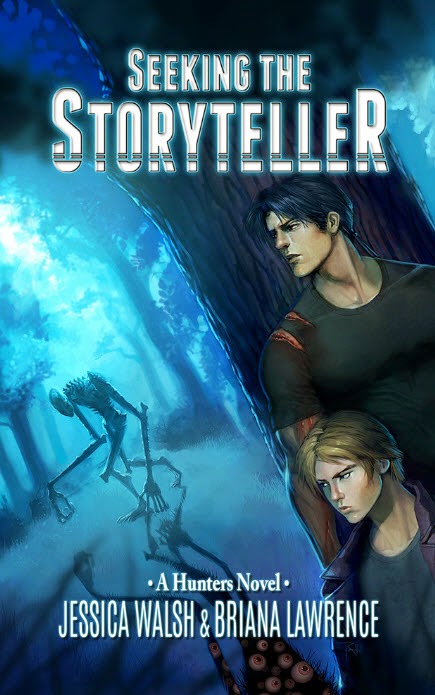 I’m actually quite fond of relaxing and watching the Scough children chase after their rabbits and each other – they’re so lively.  You’ll probably find me watching the others in the Scough tribe most of the time, or maybe the Red Dragons… I’m a people watcher, honestly.  It’s so interesting to see the stories unfold in front of your eyes.

What is your favorite color and why?
Anything bright and vibrant. I’m not too fond of dark things, but then I have a bit of a bad history with the shadows and their master, the Lurkhamara.

What is your favorite food? Why is it your favorite?
Rabbit isn't bad, but my daughter tells me all of these amazing stories about the food from your world.  Apparently, you can cook the rabbit, and then there’s things like pizza, burgers, and drinks that taste like sweet clouds. I’d like to try those if I ever get to visit.  Hopefully there’s time.

What would you say is your biggest quirk?
*chuckles*  If you give me your hand I can make words appear that will tell me your every thought and memory and everything you will do in the future. Is that quirky enough?

What is it about your antagonist that irks you the most, and why?

The Lurkhamara has his own agenda, one I don’t agree with.  He was part of the battle which killed the Kurai -- all of his people.  He seems to be under the mistaken impression that if he starts another war, he’ll become even more powerful and feared.  I don’t know that it irks me, but it’s unfortunate that he is so narrow minded.

What or who means the most to you in your life?
What, if anything, would you do to keep him/her/it in your life?

That would have to be my daughter, Mira.  I originally created her to have someone to talk to in that lonely library, but her story has become so much more complex.  I have no intention of ever losing her but -- well, stories do tend to have twists.  I can’t see the ending of hers, which troubles me sometimes, so I have no idea what the future holds for her.

What one thing would you like readers to know about you that
may not be spelled out in the book in which you inhabit?

That is an interesting question, especially since there are more stories to be told in the future.  I suppose it may be my own past.  I used to live in a library full of books, each with a person’s name on it.  I was told to never leave – but I didn't listen.  You can’t imagine how lonely it is to read all of these amazing stories of people’s lives and not have one of your own.  At the time I didn't think about the consequences, but they’re unfolding now.  I feel bad for pulling people into this story, but I will never regret leaving that place.

If you could tell your writer (creator) anything
about yourself that might turn the direction of the plot, what would it be?
*chuckles*  Oh, I've spoken with him.  The smiling man already knows my story and it wouldn't be any fun if I told him how I wanted it to go. That’s the thing about stories, they have lives of their own.  You might want to change something one moment, but years later you might realize that there was nothing to change.  I would rather live this path and see where my story takes me. The same would apply to those writing my story, I would never interfere.

I’m curious, what would you do with my power?  I have a book here, with your name on it.  You won’t be able to read it – no one can read their own story – but I could change something for you.  What would you want me to change?  Would you be willing to live with the consequences such a change would cause?

Fantastic question! Honestly, I've thought about changing certain things in my life but I don't think I'm daring - or crazy enough to have you make the change. Everything that I've experienced, both good and bad, has contributed to who I am today, and I wouldn't want to be anyone else :)

You may just want to keep your power; but thanks!