Tell me a little about yourself.

My name is Isabel Antunes and I live in Lisbon, Portugal. I have brown hair and brown eyes, and I like to wear nice shoes to work even though it’s not always wise.

I like reading and going for walks around the city but my favorite thing to do is cooking.

I’d have to say green because it’s the color of nature and fresh ingredients.

This is hard to say. I love cooking and I love so many different foods, it would be impossible to say which one I love more. I love to recreate old dishes and put my own spin on them.

What would you say is your biggest quirk?

My family is very important to me and I’d be willing to sacrifice my comfort for them.

What one thing would you like readers to know about you that may not be spelled out in the book in which you inhabit?

I’d like readers to know that life goes on after the last line. It’s not the end.

If you could tell your writer (creator) anything about yourself that might turn the direction of the plot, what would it be?

Patience is a good thing and the best is worth waiting for.

A Question for Me:

What is the best part of writing?

The best part for me is coming up with a great idea and then having the main character switch things around when I'm writing the book. I like the fact that I don't always know the ending and can experience the story as I'm writing it.

One city of two million people and only three months to find her. What are his chances? 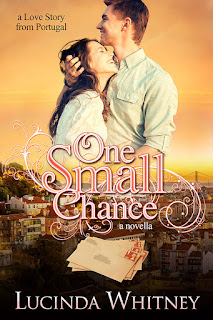 Isabel Antunes is content with her life as director of the English Academy in Lisbon. Then she’s hit by a man on a bike—a man her boss just hired to be her assistant. Despite Simon Ackerley’s repeated assurances to the contrary, Isabel believes he’s after her position, but she won’t hand it over without a fight. As if dealing with him all week is not enough, he shows up at church as well. Her only solace is in writing to the pen pal she knows as “Elliot”.

Simon Ackerley told his father that he was moving to Lisbon for the job. But that isn’t the only reason. Simon is looking for Amélie, the pen pal he’s written for fifteen years. A woman he knows everything about—except her real name and address.
When the biking accident reveals that Simon’s prickly co-worker Isabel is the elusive Amélie, he knows he has to win her trust before he can confess his true identity. If only he could tell her the actual reason why he’s come, he’s sure Isabel would treat him differently. But she’s not ready for the truth.