Folks call me Rawhide Robinson. It’s been “Rawhide” for so long I don’t recall what name they hung on me at birth. I ain’t nothin’ extra—just an ordinary cowboy. Not too old, not too young. Not short, but not exactly tall, either. Whilst dogs don’t bark and women don’t run when they see me coming, I ain’t much to look at. You could say I’m from Texas, but my home is wherever you find cattle to look after and horses to do it with, and my trail has taken me hither and yon across the Old West. For an ordinary cowboy, I guess you could say I’ve had more than my share of extraordinary adventures—and that’s what them books about me is all about.

Other than catchin’ a little extra shut eye when the opportunity arises, there ain’t no such thing as spare time for a cowboy. Evenings around the campfire or the bunkhouse will find me socializing with the other hands. I’m inclined to spin a windy now and then—fact is, I’m known far and wide for such stories. Some folks claim to disbelieve my tales, but I’ll swear with a straight face and a twinkle my eye every word of ’em is true.

I ain’t never spent no time ruminating on such foofaraw. I guess you could say dun. I’ve forked a fair amount of fine horses in my time, and most of them has been of the dun persuasion of one shade or another, from claybank to coyote to buckskin to grulla. Most of the West is dun-colored, too, so my eyes is accustomed to the hue.

Where I come from, a man eats what’s put in front of him and he don’t ponder on it much. In terms of tonnage, I’ve et more beans than anything else. Like ’em, too. Especially if they’re spiced up some with chili peppers.

What would you say is your biggest quirk?

I won’t admit to having no quirks, but them that knows me would likely say it’s a gift for gab and an uncanny ability to string words together in a euphonious manner.

What is it about your antagonist that irks you the most, and why? Share a line in the book where this irk is manifested.

While my vocabulary is filled with fancy words, I confess unfamiliarity with “antagonist.” But I’m told it means something like “opponent.” I’ve had plenty of them in my time, and they’ve been written up in the various books about me.

In Rawhide Robinson Rides the Range, there was a button name of McCarty whose lack of appreciation of my stories was downright obnoxious. His typical response was %&@*!# or some such. But, him being young and all, I believe that as he got some miles on him he would come to recognize the value of those true tales of adventure and daring in the Wild West that I tell. 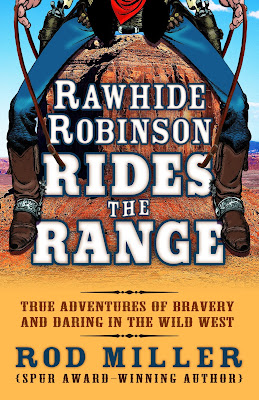 If you read Rawhide Robinson Rides the Tabby Trail, I think you’ll come to share my dislike of an old frontier relic name of Buckskin Zimmer. Rustlers ain’t fit human beings in any situation, but hanging is too good for a man who would kidnap cats.

My next adventures, which you will read about in Rawhide Robinson Rides a Dromedary, involve a hulk of a man called Balaban. In his hometown of Smyrna, he sets out to upset by various nefarious means our acquisition of camels for the United States Army. And if that ain’t bad enough, he attempts to inflict bodily harm upon a young girl I call “Hurry” (Huri in her native tongue) who knows more about dromedaries than any ten men you could round up. 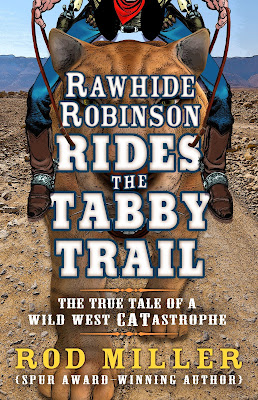 That’s an easy one. I’ve spent my life horseback babysitting cows, and them critters and the cowboy life are what mean the most to me. I’ll keep rolling out in the morning and saddling up and riding the range as long as I am able.

What one thing would you like readers to know about you that may not be spelled out in the book in which you inhabit?

Somewhere, deep down inside the wrinkled recesses of my brain, there lies an itch (that also tingles my lips) to play the flugelhorn in a marching band.

If you could tell your writer (creator) anything about yourself that might turn the direction of the plot, what would it be?

While not inclined to be idle or lazy, I believe Mr. Miller consistently overlooks opportunities for me to take naps. I am firm in the opinion that if you read about me in them books of his, you’ll see that the siestas he does allow me often precede strange and exciting adventures. (The dreams ain’t bad either.) How’s about he spends a few more pages allowin’ me to prop my thirteen-gallon hat over my face and check my eyelids for leaks?

A Question for Kathryn:

Why is it you writer types is so fussy about the way words is spelled? Mark Twain said he had no use for a man who could only come up with one way to spell a word, and I tend to agree with that sentiment.

Lovely question. While I love Mark Twain myself, I don't happen to agree with him.