Gordon speaks about what he does for the elderly who are home bound, and why he decided to write about "little known" folks in the Bible. He also shares his love for poetry and family biographies. 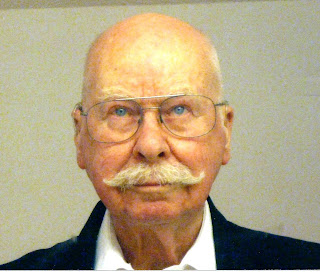 1. Tell me a about yourself. What got you started in writing?


I’m a retired rehabilitation psychologist, now aged 89.  In my professional life I’ve often had the privilege of working at jobs that had no predecessor or job description, in vocational rehabilitation, special education, vocational education, and community resource development for people with disabilities, and most recently in writing software to assist elderly people to remain longer in their homes.  I did a great deal of professional and technical writing in the course of my employment, so continuing to write in “retirement” came naturally.  I had already drafted reports of travel and of my WW II experiences, so when self-publishing came on the scene I was ready.  The first book came about when I was lying awake thinking about Shamgar, the judge in the Bible who “slew six hundred Philistines with an ox goad” and who had been given only two sentences.  So I got up and wrote his memoir.  That led to memoirs of all the other characters in the Book of Judges, which led to additional books.


2. How and where do you write? Do you prefer a lap top or do you prefer writing freehand?


I write at a desktop computer.  Since I now live alone, I can and do write at any odd hour.  It has been many years since my handwriting was good enough to compose in that way, and the ability to edit in a word processor is essential.  No doubt it would be good to follow a discipline of regular hours for writing, but that seems not to work for me.


When the words are flowing as fast as I can type, that’s my favorite part of writing.  Thinking ahead when not at the keyboard is also satisfying.  There is that point between awake and asleep when visions come.  That’s for fiction.  When writing against a broad and detailed historical backscreen, then I revel in my many years of reading and acquiring background.  The least favorite part, almost naturally, is the copy editing and spell checking that the word processor can’t do.


4. How do you come up with your characters? Why would readers want to get to know them?


When my characters are fictional, I try to visualize them against not only the plot situation, but also against the historical and cultural milieu in which they are embedded.  An example is the Prophet Samuel.  I saw him as a disinterested but fully involved person, of considerable intellect but also deep faith (not unquestioning, but committed) who was a bit pedantic, a man who thought about situations before acting, living in a culture which was coming into formation (and with him doing a significant part of the forming) and which had simple life styles and customs that he would go beyond if necessary.  I saw him as quite human and vulnerable – and who would not want to know him?  When my characters are actual people, I try to see them as a counselor (my trade) would see a client, trying to be faithful to actual behaviors and events and with an understanding of why people are the way they are.  All this, of course, has to be translated to the non-clinical reader in a narrative that exploits this rounded understanding but does not dwell on explaining the person who is revealed.


5. What types of marketing do you do to promote your writing?


Since I have no expectation of earning a living by writing, now that I am retired, my marketing has been largely limited to word of mouth and gifts of books to those in my wide circle who are known to be interested in the subject or style of one of my nine books.  But the unexpected does sometimes happen; I found on the Net my book of WWII experiences on the after-market in Australia offered at three times its usual price!


6. How do you schedule your writing time? When do you write?


I don’t schedule my writing time, but go with what is urgent within me at the time.  This leads to very irregular hours.


7. What are you currently working on? Do you have a new book out?


Last month I printed my biographies of my Scandinavian immigrant parents, and have begun a similar book on the parents of my first wife.


8. Do you have a project on the back burner? Tell me about it.


Begun some few years ago, and added to from time to time, is a book of poetry.  The poems are of several different kinds, from the lyrical (“The Voice”) to the epic (“The Saga of Saint Ingvar”).  At the present rate I will probably never finish it.  It has lately been spurred by my winning the local city’s poetry contest.


9. What would you tell a beginning writer who wants to publish but doesn't believe he/she has enough talent?


Bearing in mind that the person may or may not have talent, I tend to say something like, “A lot of writing can be done for personal satisfaction.  But writing turns out to be an economically successful career for only a few who try it.  You will only know whether you have the talent to achieve more than self satisfaction by trying to write.  You may not be satisfied by your own work at first, but remember that you may be too hard on yourself or you may be too easy.  Write something, put it into a form that is easy to read, and ask someone – me, for example – to tell you how it reads.  If you have something to say, write it and see whether you get your point across to some other people. [If they live in our apartment building, I recommend coming to our Scribblers group and taking part.]  Then see where it leads you.”
***


My books are available from Lulu.com, all in paperback and some in ebooks.
All are available from me at: gnrkrantz@aol.com OR by phone: 952-881-0449. They can also be found by Googling the titles or my name (with the middle initial, Gordon C. Krantz). All books are in standard paperback format and range from 125 to 275 pages.


The titles are:
Judges, Rulers and One Angry Levite: Historical fiction; the fictional memoirs of the characters mentioned in the Bible’s Book of Judges.

Samuel, Seer:
Historical fiction; the fictional “autobiography” of the Seer and Prophet Samuel.

The Times of the Judges: The history of the Israelites and their neighbors during the times of the Judges, roughly 1250 BC to 1000 BC, a time of great turmoil in the eastern Mediterranean; with maps. 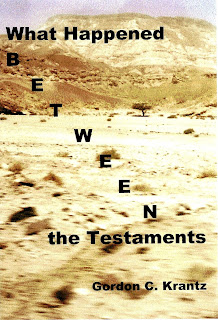 What Happened Between the Testaments: A history of the area of Judah during the time between the Old Testament (last book of the OT was written about 430 BC) and the events of the New Testament (1 BC); straight history with maps and with fictional vignettes that enliven the story.
Dig that Street!: Narrative with many pictorial illustrations of author’s (with wife Ruth, co-author) 1996 volunteer archaeology beside the Temple Mount in debris of the Temple’s AD 70 destruction in Jerusalem, and tours of Israel, Jordan, Sinai and Cairo.
Greece Freewheeling:
Narrative with many pictorial illustrations of the author’s independent tour of mainland Greece and of Santorini and Crete, by car, ferry, air and moped.

Ordinary GI: An account of the author’s experience as a soldier in World War II; of interest primarily to family members and those who are interested in the war.  It is the non-heroic saga of an ordinary soldier.  Historical and military museums have requested and have been given it.

What Did You do for a Living, Daddy? The author’s working life; of interest primarily to family members and to those who are interested in the development of rehabilitation psychology in the second half of the 20th Century.
Claus and Christine: biographies of the author’s immigrant parents, from Sweden and Norway in 1901 and 1902, and their life in America. Of interest mainly to the immediate family, but others may be interested in the Scandinavian origins and the immigrant experience.  Emigrant museums in Scandinavia have requested and received it.